Philanthropist, human rights activist, speaker and author, 31-year old Hanna Jaff Bosdet was born in San Diego to a Mexican (Catholic) mother and a Kurdish (Muslim) father and learned from a young age about bias and discrimination; in America it is not socially ide al to be either Mexican or Muslim, and she is both. Growing up with parents who love and respect each other despite their cultural differences, Hanna knew that these biases were wrong, and she decided to change the misconceptions that people have, while also helping refugees and immigrants that lack proper resources and educational tools.

Her first step was to educate herself, something that she dove head first into, receiving a Master’s Degree in International Relations from Harvard University, and a Bachelor’s Degree in Psychology from National University(California). She also studied at Columbia University in New York, Tecnológico de Monterrey, Campus Monterrey, and La Sorbonne University of Paris. She traveled the world, meeting and connecting with immigrants and refugees to see firsthand what resources they were lacking. Whether she was in Iraq, Mexico, India or beyond, the biggest lesson she learned was that they longed to learn English – one of the most universal languages – so that they can communicate better with the outside world.

In 2013 at the age of just 25 years old, Hanna created her own non-profit, the Jaff Foundation for Education. Their mission is to teach English to immigrants, refugees, and the less fortunate, launch nondiscrimination campaigns, and aim their attention on world peace and education. Through her foundation, Hanna has authored three English-learning books and volunteers at refugee camps, where she teaches English and has donated 22,000 of her books to immigrants, refugees, and the less fortunate in Peru, Kurdistan, Iraq, Mexico, India, and worldwide. In the past five years the foundation has grown exponentially – having hosted more than 200 charity events worldwide, benefiting more than 120,000 people. Today, the foundation has more than 7,000 active volunteers.(https://hannajaff.com/en/organization/). 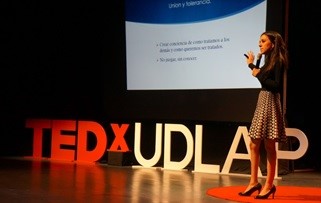 Hanna speaks at international conferences on topics such as human rights, immigrants, refugees, peace, and the importance of education, mainly to raise awareness and motivation. Hanna has been a speaker in over 70 universities, schools, and institutions around the world. In 2017, she was twice a TED speaker at TEDx Nishtiman in Erbil, Iraq and TEDx Ciudad de Puebla in San Andres Cholula, Mexico.

In addition to her own foundation, Hanna has been active in many other initiatives and non-discrimination campaigns aimed at bringing peace and teaching people on a global scale to respect one another’s race, skin color, national origin, gender, disability, religion, sexual orientation, social class, political views, and age. She organized the first “Kurdish Festival” in Mexico, the biggest one ever held outside Kurdistan, attended by 80,000 people in four days. She also conducted a We Are One campaign in support of war victims in the Middle East. Her projects promote tolerance and public awareness about eliminating hatred.

Her great humanitarian and activism work has also garnered her many accolades and awards.Entrepreneur (Mexico) named her one of their “30 Under 30 Successful Mexicans” in 2016. That same year she was recognized at the St. Gallen Symposium (Switzerland) as one of the “200 Leaders of Tomorrow Under 30”. Other honors include: “Philanthropist of the Year” (Groupo Sexenio), “5 Women Transforming Mexico”(Nivel Uno Magazine), named one of the “50 Most Admirable Mexican Women” (CARAS Magazine), one of the “15 Most Influential People in Politics in Mexico” (Reforma Newspaper), and awards in philanthropy, women’s empowerment, leadership, and academic achievements by the Kurdistan Garmiyan Regional Government.

We would love to set up an interview with you and Hanna to talk about her amazing philanthropic and activism work and look forward to hearing from you.